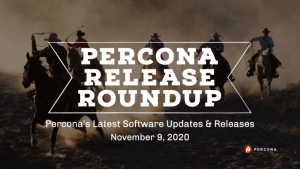 Our Release Roundups showcase the latest Percona software updates, tools, and features to help you manage and deploy our software. It offers highlights and critical information, as well as links to the full release notes and direct links to the software or service itself to download.

Today’s post includes those releases and updates that have come out since October 26, 2020, including an updated Percona Distribution for MongoDB.

Percona Distribution for MongoDB 4.2.10 was released on November 2, 2020. It is a collection of solutions to run and operate your MongoDB efficiently with the data being consistently backed up and includes the following components:

This release of Percona Distribution for MongoDB is based on Percona Server for MongoDB 4.2.10-11 and Percona Backup for MongoDB 1.3.2.

On November 2, 2020, we released Percona Server for MongoDB 4.2.10-11, an enhanced, open source, and highly-scalable database that is a fully-compatible, drop-in replacement for MongoDB 4.2.10 Community Edition. Improved audit log performance was implemented in this release, and bug fixes include a fix for when a user can’t be authorized via LDAP due to ‘LDAP search failed with error: Referral’.

On November 4, 2020, Percona Backup for MongoDB 1.3.3 was released. It is a distributed, low-impact solution for consistent backups of MongoDB sharded clusters and replica sets. This is a tool for creating consistent backups across a MongoDB sharded cluster (or a single replica set), and for restoring those backups to a specific point in time. In this release, a bug was fixed where mongodump by default connects not to the specified node but to the RS’ primary node instead.

Percona Server for MySQL 5.6.50-90.0 was released on November 2, 2020. It includes all the features and bug fixes available in MySQL 5.6.50 Community Edition in addition to enterprise-grade features developed by Percona. A bug fixed corrects the buffer calculation for the audit plugin used when large queries are executed (PS-5395).

That’s it for this roundup, and be sure to follow us on Twitter to stay up-to-date on the most recent releases! Percona is a leader in providing best-of-breed enterprise-class support, consulting, managed services, training, and software for MySQL, MongoDB, PostgreSQL, MariaDB, and other open source databases in on-premises and cloud environments.