Say Hello to Libcoredumper – A New Way to Generate Core Dumps, and Other Improvements 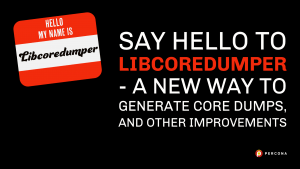 In a perfect world, we expect all software to run flawlessly and never have problems such as bugs and crashes. We also know that this perfect world doesn’t exist and we better be as prepared as possible to troubleshoot those types of situations. Historically, generating core dumps has been a task delegated to the kernel. If you are curious about how to enable it via Linux kernel, you can check out Getting MySQL Core file on Linux. There are a few drawbacks that pose either a limitation or a huge strain to get it working, such as:

The above issues have driven exploration of alternative ways to do create a core dump to help troubleshooting bugs and crashes. More details can be found at PS-7114 .

The libcoredumper is a fork of the archived project google-coredumper. Percona has forked it under Percona-Lab Coredumper, cherry-picked a few improvements from other forks of the same project, and enhanced it to compile and work on newer versions of Linux as well on newer versions of GCC and CLANG.

This project is a Tech Preview, as you may infer from the repository name (Percona Lab). We might not maintain compatibility with future kernel versions and/or patches. One should test the core dumper on their environment before putting this tool into production. We have tested on kernel versions up to 5.4.

This functionality is present on all versions of Percona Server for MySQL and Percona XtraDB Cluster starting from 5.7.31 and 8.0.21. If you compile PS/PXC from source, you can control if the library will be compiled by switching -DWITHCOREDUMPER to ON/OFF (default is ON).

How To Configure It

A new variable named coredumper has been introduced. One should include it under the [mysqld] section of my.cnf and it works independently of the older configuration core-file. This new variable can either be a boolean (no value specified) or with value. It follows a few rules:

Every core file will end with the timestamp of the crash instead of PID, for two main reasons:

How To Know If I Am Using libcoredumper

The above behavior remains the same, however, when MySQL is using libcoredumper to generate the core file, one should see that message informing that the library will be responsible for the action:

Apart from libcoredumper, starting from the same 5.7 and 8.0 releases a stack trace will also:

Here is one example of how a crash with stack trace will look like:

Libcoredumper serves as an alternative for current –core-file functionality for generating memory dumps. In case of any crash of MySQL, a core dump is written and can be later processed /read via GDB to understand the circumstances of such a crash.
Users can enable it by adding the below variable to [mysqld] section of my.cnf:

Percona Server for MySQL versions starting from 5.7.31 and 8.0.31 include the library by default. Refer to below documentation pages for more details:

If you faced any issue or limitation on enabling core dumps before feel free to test new versions of Percona Server for MySQL/Percona XtraDB Cluster and use libcoredumper. Also, any feedback is very welcome on how we can improve the troubleshooting of bugs/crashes even further.

By Peter Cruz September 26, 2020
The report covers an in-depth analysis of the Affiliate market and offers key insights on current and emerging trends, market drivers, and market insights ...
Read more

By Peter Cruz September 26, 2020
The report covers an in-depth analysis of the Blockchain In Telecom market and offers key insights on current and emerging trends, market drivers, and ...
Read more
Loading...