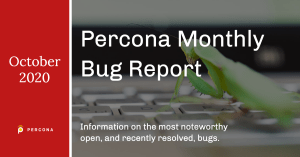 At Percona, we operate on the premise that full-transparency makes a product better. We strive to build the best open-source database products, but also to help you manage any issues that arise in any of the databases that we support. And, in true open-source form, report back on any issues or bugs you might encounter along the way.

In this October 2020 edition of our monthly bug report, we have the following list of bugs:

PS-5641 (MySQL#95863): Deadlock on MTS replica while running administrative commands. This is a design flaw in the way MTS locks interact with non-replication locks like MDL or ACL locks, and the lack of deadlock detection infrastructure in replication.

There are three ways of hitting this issue:

MySQL#91977: Dropping Large Table Causes Semaphore Waits, due which no Other Work Possible.

Running DROP/ALTER on the large table could lead to this bug. DROP/ALTER query will be stuck in ‘checking permissions’ state  and later it may crash mysqld due to long semaphore

Wait. It’s critical since it can result in unplanned downtime. The issue is also evident with the pt-online-schema-change tool while performing ALTER operations on large tables.

This is the design flow, due to such InnoDB protection for semaphore all naturally long DDL operations are at the risk. To address this issue there is a Feature Request(MySQL#92044) to have a configurable timeout for long semaphore wait until the server dies.

PXC-3366: Upgrading SST traffic enabled  PXC 5.7 to PXC 8.0 will not show any status/variable, it will give empty output always.

Also taking backup of this upgraded PXC 8.0 node using xtrabackup will fail with a crash due to this bug.

PXC-3396: SST failing because of the wrong binlog name.

Setting the log-bin name explicitly with the data-dir path will result in SST failure.

Workaround for this issue is, Use different directories for binlog other than data dir and SST will work fine. Also, I do not see this issue with default binlog settings which will create binlogs in data-dir with the name “binlog.*”

PXC-3418: Cluster node locked up with alter table(even when using pt-online-schema-changes) and concurrent RW load. It is possible to hit a writer node deadlock when ALTER TABLE is run a few times on another node, with a concurrent read/write load on the writer node.

IST to the lower version node will fail with this error when the write load is running on the Donor node. Rolling upgrade is the most commonly used method resulting in a different version of pxc nodes for while and in such cases, the user can experience this issue easily.

PXB-2237: PXB crashes during a backup when an encrypted table is updated

Databases with encrypted tables are affected by this bug. As a workaround, Taking backup in non-peak hours could avoid this crash Or block write access to encrypted tables

As a result of this bug after restored, you will see additional database/s which were not part of a partial backup. Issue evident only in Xtrabackup 8.0 due to new data dictionary implementation in MySQL 8.0 version, this issue is not reproducible with xtrabackup 2.4.

The workaround for this issue is to use “DROP DATABASE IF EXISTS” for dropping unwanted extra database/s.

PT-1570: Percona Toolkit tools fail to detect columns with the word GENERATED as part of the comment.

The issue is actually much more severe for other percona toolkit tools using the same TableParser.pm package- like pt-online-schema-change and pt-archiver. Basically, with the old package, the tool will skip the column that has ‘generated’ word in a comment in the copying process. This will result in data loss.

Therefore, it is very important to use the toolkit version 3.0.11 or higher to avoid that serious problem.

PT-1747: pt-online-schema-change was bringing the database into a broken state when applying the “rebuild_constraints” foreign keys modification method if any of the child tables were blocked by the metadata lock.

It is a critical bug, It destroys the original table when the pt-online-schema-change tool fails. For example, in a case, an attempt to alter data type on parent table not only failed when a child table refers to it (FK) but resulted in the loss (drop) of both tables.

With a hidden replica (with/without any delay specified). Another replica will show a delay of the max unsigned integer value (about 136 years).

The problem here is that sometimes, MongoDB reports (in getDiagnosticData) that the primary behind the secondary.

Since timestamps are unsigned ints, subtracting a bigger number produces an overflow and that’s why we see 100+ years lag.

Occurring at irregular intervals and only affected to pmm docker installation with no external internet access from pmm-server docker container. The issue is only visible for a while(around 5-10 mins) after starting pmm-server later you will not see this issue.

We welcome community input and feedback on all our products. If you find a bug or would like to suggest an improvement or a feature, learn how in our post, How to Report Bugs, Improvements, New Feature Requests for Percona Products.