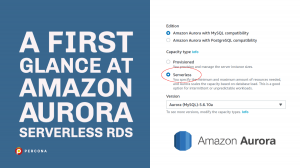 If you often deploy services in the cloud, you certainly, at least once, forgot to stop a test instance. I am like you and I forgot my share of these. Another mistake I do once in a while is to provision a bigger instance than needed, just in case, and forget to downsize it. While this is true for compute instances, it is especially true for database instances. Over time, this situation ends up adding a cost premium. In this post, we’ll discuss a solution to mitigate these extra costs, the use of the RDS Aurora Serverless service.

What is Amazon Aurora Serverless?

Since last spring, Amazon unveiled a new database related product: RDS Aurora Serverless. The aim of this new product is to simplify the management around Aurora clusters. It brings a likely benefit for the end users, better control over cost. Here are some of the benefits we can expect from this product:

The database is constantly monitored and if the load grows beyond a given threshold, a bigger Aurora instance is added to the cluster, the connections are moved and the old instance is dropped. The opposite steps happen when a low load is detected. Also, if the database is completely inactive for some time, it is automatically stopped and restarted when needed. The RDS Aurora Serverless cluster type is available for MySQL (5.6 and 5.7) and PostgreSQL (10.12).

There are not many details available as to how things are actually implemented but likely but the proxy layer is able to transfer a connection from one server to another when there is a scale up or down event. Essentially, we can assume that when the cluster is modified, the steps are the following:

How To Configure It

The configuration of an RDS Aurora Serverless cluster is very similar to a regular Aurora cluster, there are just a few additional steps.  First, of course, you need to choose the serverless type: 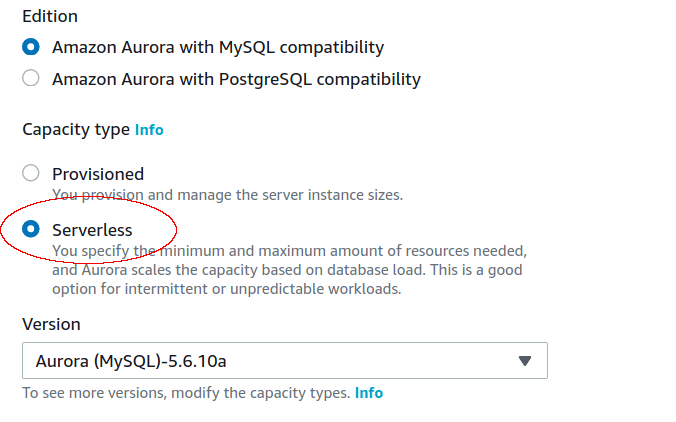 And then you have to specify the limits of your cluster in “Capacity”. The capacity unit is ACU which stands for Aurora Capacity Unit. I couldn’t find the exact meaning for the ACU, the documentation has: “Each ACU is a combination of processing and memory capacity.”. An ACU seems to provide about 2GB of RAM and the range of possible values is 1 to 256. You set the minimum and maximum ACU you want for the cluster in the following dialog box:

The last step is to specify the inactivity timeout after which the database is paused: 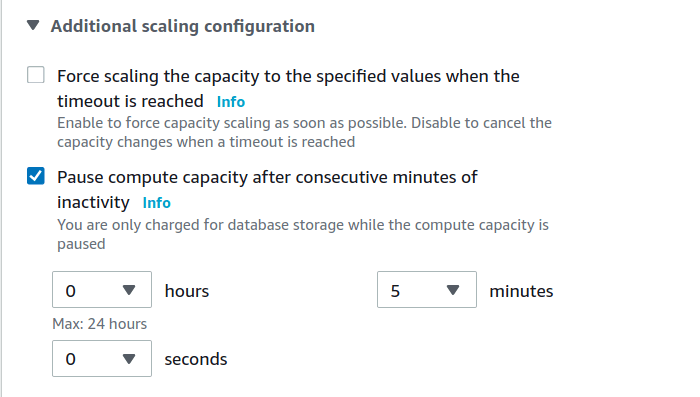 If the Aurora Serverless cluster has no running server instances, an attempt to connect to the database will trigger the creation of a new instance.  This process takes some time.  I used a simple script to measure the connection time after an inactivity timeout and found the following statistics:

You’ll need to make sure the application is aware of a new connection, as the database can take close to a minute to complete.  I got caught a few times with sysbench timing out after 30s. It is important to remember the initial capacity used is the same as the one when the Aurora Serverless instance stopped, unless you enabled the “Force scaling the capacity…” parameter in the configuration.

If an Aurora Serverless cluster is idle for more than its defined inactivity time, it will be automatically paused.  The inactivity here is defined in terms of active connections, not queries. An idle connection doing nothing will prevent the Aurora Serverless instance from stopping. If you intend to use the automatic pause feature, I recommend setting the “wait_timeout” and “interactive_timeout” to values in line with the cluster inactivity time.

A process monitors the Aurora Serverless instance and if it sees a performance issue that could be solved by the use of a larger instance type, it triggers a scale up event.  When there is an ongoing scale up (or down) event, you’ll see a process like this one in the MySQL process list:

Bear in mind a scale up event can take some time, especially if the server is very busy. While doing some benchmarks, I witness more than 200s on a few occasions. The queries load is affected for a few seconds when the instances are swapped.

To illustrate the scale up behavior, I ran a modified sysbench benchmark to force some CPU load. Here’s a 32 threads benchmarks scanning a table on an Aurora Serverless cluster having an initial capacity of 1. 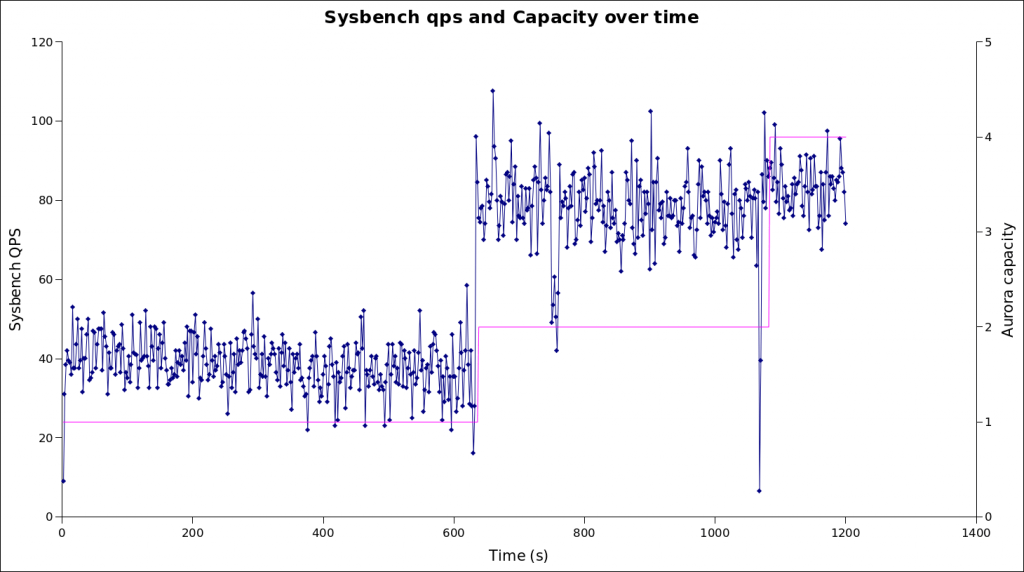 The first scale up happened a little after 600s while the second one occurred around 1100s. The second event didn’t improve much the load but that is likely an artifact of the benchmark. It took a long time to increase the capacity from 1 to 2, it could be related to the high CPU usage on the instance. There is usually a small disruption of the query load when the instances are swapped but nothing too bad.

While scale up events happen when needed, scale down events are throttled to about once per 5 minutes except if the previous scaling event was a “scale up”, then the delay is 15 minutes.

Pros and Cons of Aurora Serverless

The RDS Aurora Serverless offering is very compelling for many use cases. It reduces the cost and simplifies the management. However, you must accept the inherent limitations like the long start up time when the instance was on pause and the small hiccups when the capacity is modified. If you cannot cope with the start up time, you can just configure the instance so it doesn’t pause, it will scale down to a capacity of 1 which seems to map to a t3.small instance type.

Of course, such an architecture imposes some drawbacks. Here’s a list of a few cons:

If we consider a database used by web developers during the day and which can be paused out of the normal work hours and during the weekends, the saving can be above $240/month if the daily average capacity is only eight hours.