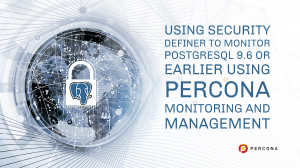 I have previously written a blog post on the detailed steps involved in enabling PostgreSQL monitoring using PMM. In that post, you could see me talking about the role: pg_monitor that can be granted to monitoring users. The

However, this feature is only available from PostgreSQL 10. So, let’s discuss how to deal with the previous releases such as PostgreSQL 9.6 or earlier.

One of the easiest methods is to grant

role to the monitoring user. But, granting the SUPERUSER access may not work in all the environments as it has the privileges to access, modify, and alter the database objects. For that reason, we could use to safely grant access to selected statistics views. Let us first understand the difference between a and a in PostgreSQL functions.

When you execute a function in PostgreSQL, it is executed using the privileges of the user calling it. So, if the calling user does not have access to select a specific table, then, the SQL statements on that table may fail, so the execution of the function fails.

To enable PostgreSQL monitoring using PMM, you should be granting access to some of the views being accessed by PMM as of today.

) who should be given indirect access to the above-mentioned views.

Step 1: Create the monitoring user and the schema in which the functions and views can be created.

Step 2: Create the functions to access the views being accessed by PMM, as a SUPERUSER. Make sure to specify

so that the user calling this function can use the superuser role to access the data from the views: and .

While creating the last function

, it assumes that the extension has been created in the schema. If you have specified another schema while creating this extension, please specify the appropriate schema prefix instead of .

Step 3: Create views with the same name as the original views in the

schema. Then, grant the SELECT access on the newly created view to the monitoring user.

So, when you connect to postgres using the monitoring user

Your monitoring user for Percona Monitoring and Management is successfully created once the above three steps are completed.

Our white paper “Why Choose PostgreSQL?” looks at the features and benefits of PostgreSQL and presents some practical usage examples. We also examine how PostgreSQL can be useful for companies looking to migrate from Oracle.