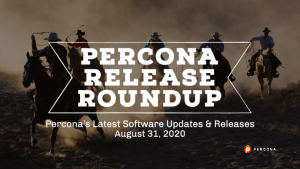 Today’s post includes those releases and updates that have come out since August 17, including new features and improvements for Percona Server for MySQL 5.7.31-34 as well as updated versions and new features for our MongoDB software.

On August 24th, 2020, Percona Server for MySQL 5.7.31-34 was released. It includes all the features and bug fixes available in MySQL 5.7.31 Community Edition in addition to enterprise-grade features developed by Percona. Along with some bug fixes, there are several new features and improvements in this release, including Document RocksDB variables: rocksdb_max_background_compactions, rocksdb_max_background_flushes, and rocksdb_max_bottom_pri_background_compactions, the addition of Coredumper functionality, and the enhancement of crash artifacts (core dumps and stack traces) to provide additional information to the operator.

Percona Backup for MongoDB 1.3.0 was released on August 26, 2020. It is a distributed, low-impact solution for consistent backups of MongoDB sharded clusters and replica sets. This is a tool for creating consistent backups across a MongoDB sharded cluster (or a single replica set), and for restoring those backups to a specific point in time. New features include adding oplog archiver thread for PITR, and the ability to modify “pbm restore” to accept arbitrary point in time when PITR oplog archives available.

August 26, 2020, saw the release of Percona Server for MongoDB 4.4.0-1. It is an enhanced, open source, and highly-scalable database that is a fully-compatible, drop-in replacement for MongoDB 4.4.0 Community Edition. It supports MongoDB 4.4.0 protocols and drivers.

This release includes all features of MongoDB 4.4.0 Community Edition and provides Enterprise-level enhancements for free.

Percona Distribution for MongoDB 4.4.0, a collection of solutions to run and operate your MongoDB efficiently with the data being consistently backed up, was released on August 26, 2020. It includes the following components:

This release of Percona Distribution for MongoDB is based on Percona Server for MongoDB 4.4.0-1 and Percona Backup for MongoDB 1.3.0.