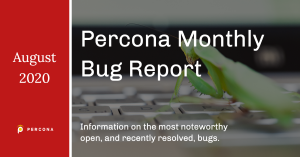 At Percona, we operate on the premise that full-transparency makes a product better. We strive to build the best open-source database products, but also to help you manage any issues that arise in any of the databases that we support. And, in true open-source form, report back on any issues or bugs you might encounter along the way.

In this edition of our monthly bug report, we have the following list of bugs:

Critical since a user can easily hit this bug when performing ALTER on the table with FK for specified cases in the bug report. With debug build, it crashes.

Running DROP/ALTER on the large table could lead to this bug. DROP/ALTER query will be stuck in ‘checking permissions’ state  and later it may crash mysqld due to long semaphore

Wait. It’s critical since it can result in unplanned downtime. The issue also evident with the pt-online-schema-change tool while performing ALTER operations on large tables.

PS-6990(MySQL#100118): Server doesn’t restart because of too many gaps in the mysql.gtid_executed table

This issue introduces due to the Clone plugin replication coordinates worklog (WL#9211) changes for updating the mysql.gtid_executed table. With this bug, Replica not usable, as mysql.gtid_executed is getting huge, crashes, and never comes back because of the way how the GTID compression works.

Audit plugin could leak memory resulting in OOM on the slave if STATEMENT base replication is used.

Concurrent updates on the same record (DELETE/INSERT and UPDATE from different sessions) could lead to this crash. This bug is critical since such operations are common for many database environments.

IST to the lower version node will fail with this error when the write load is running on the Donor node. Rolling upgrade is the most commonly used method resulting in a different version of pxc nodes for while and in such cases, the user can experience this issue easily.

PXB-2237: PXB crashes during a backup when an encrypted table is updated

Databases with encrypted tables are affected by this bug. As a workaround, Taking backup in non-peak hours could avoid this crash.

As a result of this bug after restored, you will see additional database/s which were not part of a partial backup. Issue evident only in Xtrabackup 8.0 due to new data dictionary implementation in MySQL 8.0 version, this issue is not reproducible with xtrabackup 2.4.

The workaround for this issue is to use “DROP DATABASE IF EXISTS” for dropping unwanted extra database/s.

PT-1747: pt-online-schema-change was bringing the database into a broken state when applying the “rebuild_constraints” foreign keys modification method if any of the child tables were blocked by the metadata lock.

Replica lag takes the lag value from the delayed node which makes it unreliable for all nodes. So PMM cannot be used to monitor delays.

In case the user doesn’t want to show a query example that has “Sensitive Data” on PMM Query Analytics UI  they can disable it with the help of –disable-queryexamples option in pmm-admin.

But this option is not working as expected when mysql instance added using –query-source perfschema option and on PMM Query Analytics UI  query examples is visible with original data.

Workaround: we do not see this issue when using –query-source slowlog

Occurring at irregular intervals and only affected to pmm docker installation with no external internet access from pmm-server docker container. The issue only visible for a while(around 5-10 mins) after starting pmm-server later you will not see this issue.

We welcome community input and feedback on all our products. If you find a bug or would like to suggest an improvement or a feature, learn how in our post, How to Report Bugs, Improvements, New Feature Requests for Percona Products.