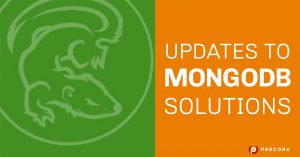 Percona Backup for MongoDB now provides Point in Time Recovery (PITR). With PITR, an administrator can recover the entire replica set to a specific timestamp. Along with taking backup snapshots users can enable Incremental Backup. By doing this, you capture the Oplog 24/7 for each replica set (including those in clusters) to the same storage you use to store backup snapshots.

This is especially important in cases of data corruption. PITR enables you to reset the system to a time before the offending incident occurred, thus restoring the environment to a healthy state. For example, if you drop an important collection at 2020-08-24T11:05:30, you can restore the environment to 2020-08-24T11:05:29 to recover as much data as possible before the damage occurred.

For more details on what’s new in the community MongoDB 4.4 release, please review our expert’s blog.

To learn how Percona Backup for MongoDB can benefit your business, please visit our website.

To learn more about the latest release of Percona Distribution for MongoDB, check out the release notes.