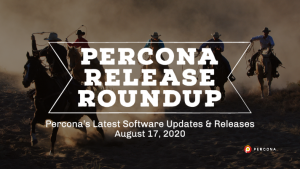 Today’s post includes those releases and updates that have come out since August 3, including improvements to the Query Analytics Dashboard in Percona Monitoring and Management, and Kerberos authentication in Percona Server for MongoDB.

On August 4, 2020, Percona Monitoring and Management 2.9.1 was released. It is a free and open-source platform for managing and monitoring MySQL, MongoDB, and PostgreSQL performance. There were many improvements in this release, including improved metrics names and descriptions in the Query Analytics Dashboard, consistent sort order in dashboard drop-down filter lists, and the ability to temporarily silence viewed but unactioned alerts in the Security Threat Tool. In addition, there were several bug fixes, including fixes to an ‘InvalidNamespace’ EXPLAIN error with some MongoDB queries, the Query Analytics Dashboard not resizing for some screen resolutions, and the bulk failure of SHOW ALL SLAVES STATUS scraping on PS/MySQL distributions triggers errors.

August 13, 2020, saw the release of Percona Server for MongoDB 3.6.19-7.0, an enhanced, open source, and highly-scalable database that is a fully-compatible, drop-in replacement for MongoDB 3.6.19 Community Edition, supporting MongoDB 3.6.19 protocols and drivers. A new feature is an addition of Kerberos authentication, and bug fixes include a user’s permissions remain intact after a user is removed from LDAP, detection of a connection loss to LDAP server reconnects automatically, and the addition of ldapUserCacheInvalidationInterval parameter to periodically flush external user cache.

Percona Toolkit 3.2.1 was released on August 17, 2020. It is a collection of advanced open source command-line tools, developed and used by the Percona technical staff, that are engineered to perform a variety of MySQL and MongoDB server and system tasks that are too difficult or complex to perform manually, freeing your DBAs for work that helps you achieve your business goals. An improvement in this release is the review and consideration of lintian reported issues, and bug fixes include pt-pg-summary fails for Postgres12, pt-table-checksum giving error CRC32 never needs BIT_XOR optimization, and pt-mongodb-summary fails on standalone mongodb instances.