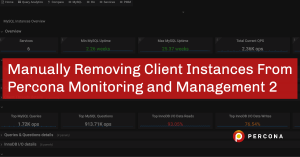 In this blog post, we will take a look at how we can manually remove a client instance from Percona Monitoring and Management (PMM) version 2. Under normal operations, this shouldn’t be necessary, since a graceful PMM client uninstall shouldn’t leave any lingering instances around. However, it may happen that an instance is destroyed (for instance, an EC2 server that is abruptly terminated; or a vagrant machine or container removed) without executing proper uninstall steps.

Removing the instance won’t delete its associated data, but it will prevent the server from continuing to try to poll data from a non-existent client.

First, let’s go over the steps we should take to avoid running into issues that will require manual intervention. There are two ways in which we can let the PMM server know we no longer want an instance or process to be monitored. These cases are for instances that are still working correctly (i.e.: we can access the client nodes, and use the pmm-admin client tool).

1- The first way is to remove the pmm2-client package altogether, meaning that you don’t want any agent at all to continue working in that instance.

2- The second way is to remove a service in particular. First, use pmm-admin list to get the list of services running. An example output is:

Let’s say we want to remove the MySQL service (note that it is not possible to remove one agent, only, since the remove subcommand operates at service level). We need to issue the following command:

In the following section, we’ll explore how to remove them when things go awry.

If the instance was not cleanly deregistered from PMM, it can indefinitely linger on in the Home Dashboard and node/service drop-down lists, while graphs will show no data being populated. After the node is deleted, it may continue to show in the Home Dashboard if there was recent data still collected. If this is the case, you will have to wait until the data retention period purges the data (but at least you won’t see it after that :)).

If we no longer have access to the instance, we should resort to the pmm-admin inventory “hidden” feature. In this case, we won’t have direct access to the old client node, but we can use the pmm-admin client tool from any other currently-working node.

It is not really a hidden feature, though, since we can consult the tool about it:

However, it will not show listed as a subcommand if we check pmm-admin –help (hence, the quotes around hidden). This functionality is not intended for day-to-day operations, and should only be used while there is no other way to remove lingering phantom nodes. The Dev team is working on fixing this, but in the meantime, we thought we should share these steps.

The only thing we need for this is a working pmm-admin command from any node. We can list all nodes subscribed to PMM with the following command:

And consult the help outputs on how to proceed:

Let’s suppose we want to remove node2, so we’ll need to execute the following command:

Note how we are using its “Node ID” string as the last argument, which we previously got from the list nodes output above.

At this point, agents related to that node will no longer be scraped by PMM server, and should not appear as unhealthy services under the Prometheus targets page (located at http://<your_PMM_URL>/prometheus/targets).

Manual Removal of Nodes (Another Way)

Another thing we can do to overcome this is to use the –force argument while using the same node name to re-add the client. In this way, we will be effectively overriding the orphaned client with a new instance of it. Of course, this means that we will need to have a new client to add, which won’t always be the case. The command would look like:

In this case, choose NODE_NAME to be the same as the orphaned node, and it will be overwritten.

If you want to avoid these kinds of issues, it’s always best to ensure a clean uninstall procedure is run. But if you find out it’s too late for that, you can use the inventory commands, while we provide a cleaner way to work around this situation.