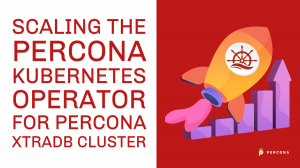 It’s just a matter of running the following command:

Good, you run the command without issues and now you will have 5 pxc pods! Right? Let’s check out how the pods are being replicated:

You not only see 4 pods instead of 5 but also the one new pod is stuck in the “Pending” state. Further info shows that the kube scheduler wasn’t able to find a node to deploy the pod:

From that output, we can see what’s the issue: Affinity. Or more specifically: Anti-affinity

The operator provides an option called “antiAffinityTopologyKey” which can have several values:

The default value is kubernetes.io/hostname which pretty much means: “only one Pod per node”

In this case, the kubernetes cluster is running on top of 3 aws instances, hence when one tries to increase the number of pods, the scheduler will have trouble finding where to put that new pod.

There are several options. One plain and simple (and obvious) one can be to add new nodes to the k8s cluster.

Another option is to set the anti-affinity to “none”. Now, why one would want to remove the guarantee of having POD distribute among the available nodes? Well, think about lower environments like QA or Staging, where the HA requirements are not hard and you just need to deploy the operator in a couple of nodes (control plane/worker).

Now, here’s how the affinity setting can be changed:

Edit the cluster configuration. My cluster is called “cluster1” so the command is:

Find the line where “antiAffinityTopologyKey” is defined and change “kubernetes.io/hostname” to “none” and save the changes. This modification will be applied immediately.

Delete the old pods ONE BY ONE. Kubernetes will spawn a new one, so don’t worry about it. For example, to delete the pod named “cluster1-pxc-0”, run:

You will see how the Pods are recreated and the one that was on “pending” moves on:

Finally, the goal of having 5 pods is achieved:

But what if one needs a more sophisticated option? One with some degree of guarantee that HA will be met? For those cases, the operator Affinity can use an advanced approach, by using the NodeAffinity with “preferredDuringSchedulingIgnoredDuringExecution”

And also, in the future, the operator will make use of the “topologySpreadConstraints” spec to control the degree to which Pods may be unevenly distributed.

Thanks to Ivan Pylypenko and Mykola Marzhan from the Percona Engineer Team for the guidance.