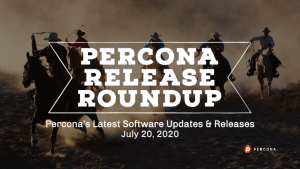 Today’s post includes those releases and updates that have come out since July 6, including a new version of QAN for Percona Monitoring and Management, and version updates to Percona Server for MongoDB and Percona Distribution for MongoDB.

On July 7, 2020, Percona Server for MongoDB 4.2.8-8 was released. It is an enhanced, open source, and highly-scalable database that is a fully-compatible, drop-in replacement for MongoDB 4.2.8 Community Edition, supporting MongoDB 4.2.8 protocols and drivers. There are several bug fixes in this release, including ensuring a user’s permissions remain intact after a user is removed from LDAP and a bug where some LDAP servers drop idle connections upon timeout.

July 7, 2020, saw the release of Percona Distribution for MongoDB 4.2.8. It is a collection of solutions to run and operate your MongoDB efficiently with the data being consistently backed up. This release is based on Percona Server for MongoDB 4.2.8-8 and Percona Backup for MongoDB 1.2.0.

Percona Monitoring and Management 1.17.4 was released on July 8, 2020. It is a free and open-source platform for managing and monitoring MySQL, MongoDB, and PostgreSQL performance. In this release, we added missing dashboards to the list in the README.md file, and fixed several bugs, including a fix for Grafana vulnerability, update to ESLints dependencies, update minimist to 1.2.3, and a fix to the Wizard page where it was not showing for AMI or OVF images.

On July 14, 2020, Percona Monitoring and Management 2.9.0 was released. This release brings a major rework of the Query Analytics (QAN) component, completing the migration from Angular to React, and adding new UI functionality and features. Also, new dashboards for MongoDB Replica Set Summary, MongoDB Cluster Summary, MySQL User Details, and user interface for MongoDB EXPLAIN. Several bugs were fixed, as well, and a full list is available in the release notes.