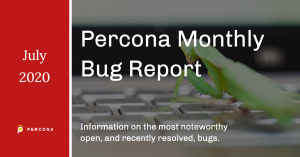 At Percona, we operate on the premise that full-transparency makes a product better. We strive to build not only the best open-source database products but also to help you manage any issues that arise in any of the databases that we support. And, in true open-source form, report back on any issues or bugs you might encounter along the way.

In the July 2020 edition of our monthly bug report, we have the following list of bugs:

Concurrent update on a record (a combination of DELETE/INSERT and UPDATE ) could lead to this crash. This bug is critical since such operations are common for many database environments.

This is a critical bug because it will result in “Out Of Memory” for users who use routines extensively.

This bug is critical since it resulting in incorrect data.

PS-5641(MySQL#95863): Multithreaded slave replication deadlock when set super_read_only to ON

Source of this bug is PS-7057, where upgrade failed with a crash when innodb_track_changed_pages

Affected users using foreign keys with PXC, When deleting/updating from a child table in a FK relationship, if a parent table has referenced row(s) locked, the operation on a child table will get locked and fail as soon as the parent table is unlocked. For UPDATE case, it’s important to touch a column, which is a part of a constraint.

PXB-2237: PXB crashes during backup when an encrypted table is updated

Databases with encrypted tables are affected by this bug. As a workaround, Taking backup in non-peak hours could avoid this crash.

Issue evident only in XtraBackup 8.0 due to new data dictionary implementation in MySQL 8.0 version, this issue is not reproducible with XtraBackup 2.4.

This bug is critical since, If there is no external internet access on pmm-server docker container, then the Nginx process will keep restarting and pmm-client cannot communicate to pmm-server.

Occurring at irregular intervals and only affected to pmm docker installation with no external internet access from pmm-server docker container. Critical for automated deployment of the PMM server because it will interrupt pmm-client and server communication for while after pmm server installation

We welcome community input and feedback on all our products. If you find a bug or would like to suggest an improvement or a feature, learn how in our post, How to Report Bugs, Improvements, New Feature Requests for Percona Products. For the most up-to-date information, be sure to follow us on Twitter, LinkedIn, and Facebook.