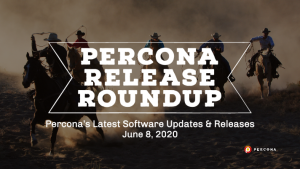 Today’s post includes those releases and updates that have come out since May 26, 2020, including several versions of Percona Server for MongoDB, Percona Distribution for MongoDB 4.2.7, Percona XtraBackup 8.0.12, and the Percona DBaaS CLI Tool 0.2.0, a companion tool for the Percona Kubernetes Operators.

On May 26, 2020, Percona Server for MongoDB 3.6.18-6.0 was released. It is an enhanced, open source, and highly-scalable database that is a fully-compatible, drop-in replacement for MongoDB 3.6.18 Community Edition. A new feature in 3.6.18-6.0 includes options to control the size of several WiredTiger hash arrays.

Percona DBaaS CLI Tool 0.2.0 was released on June 3, 2020. It is a companion tool for the Percona Kubernetes Operators which provides a simplified way for users to deploy and manage databases without needing deep Kubernetes knowledge. This release 0.2.0 is experimental and supports the latest version of the Kubernetes Operators. There are several improvements in this release, including but not limited to support for the Percona XtraDB Cluster and Percona Server for MongoDB 1.4.0 versions, Ubuntu 20.04 support, detection of “not enough resources” situations and user-friendly messages, and new options to trigger graceful shutdown and restart of the Percona XtraDB Cluster. In addition, the incorrect syntax in the documentation for the MongoDB list of commonly used options has been fixed.

On June 4, 2020, we released Percona Server for MongoDB 4.2.7-7. It is a drop-in replacement for MongoDB 4.2.7 Community Edition and supports MongoDB 4.2.7 protocols and drivers. A new feature adds options to control the size of several WiredTiger hash arrays concerned with data handles and one for session cursor cache.

June 4, 2020, was also release day for the Percona Distribution for MongoDB 4.2.7, a collection of solutions to run and operate your MongoDB efficiently with the data being consistently backed up. It includes both Percona Server for MongoDB and Percona Backup for MongoDB.