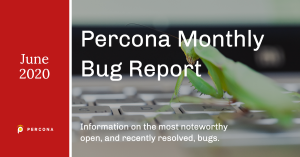 At Percona, we operate on the premise that full-transparency makes a product better. We strive to build not only the best open-source database products but also to help you manage any issues that arise in any of the databases that we support. And, in true open-source form, report back on any issues or bugs you might encounter along the way.

In the June 2020 edition of our monthly bug report, we have the following list of bugs:

With slave_compressed_protocol option, MySQL will crash if the slave fails to connect to master and then later succeeds.

This is a critical bug because it will result in “Out Of Memory” for users who use routines extensively.

This is a performance regression bug for statements using SELECT DISTINCT. Introduced in 8.0.18 version and fixed in 8.0.21.  As a workaround, you can use internal_tmp_mem_storage_engine=MEMORY to avoid this bug.

This is a regression bug works fine in the previous 5.7 releases but this can be again noticed in the latest MySQL server versions i.e 5.7.30 and 8.0.20. ps_truncate_all_tables() procedure, Truncates all Performance Schema summary tables, resetting all aggregated instrumentation as a snapshot. Produces a result set indicating how many tables were truncated.

For the partition table, and using XA trx, after xa prepare and restart, it will reports ‘ Invalid (old?) table or database name’ in mysql error log. This issue is not affecting existing table data or access to it, but at every mysqld startup, it will add this error in mysql error log which sometimes is curious for users. The error will disappear only after dropping the problematic table which is not the option always.

Source of this bug is PS-7057, where upgrade failed with a crash when innodb_track_changed_pages =1

Due to the innodb redo log format changes in MySQL 8.0.20, Xtrabackup-80 failed to take a backup. This is a critical bug since xtrabackup-8.0.11 can not be used with MySQL 8.0.20. Fixed added in the latest release of Percona XtraBackup version 8.0.12.

Reproducible only with min.io storage, works fine for other supported Cloud Storages.

Issue evident only in Xtrabackup 8.0 due to new data dictionary implementation in MySQL 8.0 version, this issue is not reproducible with xtrabackup 2.4

Supervisor is a client/server system that allows its users to monitor and control a number of processes on UNIX-like operating systems. All PMM server components services managed by Supervisor. The problem appears only after restarting upgraded OVF/AMI.

We welcome community input and feedback on all our products. If you find a bug or would like to suggest an improvement or a feature, learn how in our post, How to Report Bugs, Improvements, New Feature Requests for Percona Products. For the most up-to-date information, be sure to follow us on Twitter, LinkedIn, and Facebook.