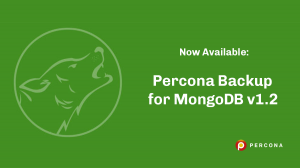 Percona Backup for MongoDB v1.2 is out! In a nutshell it offers (much) faster compression choices, backup cancellation, and assorted convenience features such as a universal backup deletion command and progress logging.

And, for the DBAs out there in the field, we’ve added a whole extra binary (pbm-speed-test) that will give a quick way to investigate your speed limit – Is it the remote storage write speed? Compression algorithm? A network bottleneck?

Whether you’re using S3, GCS, Minio, or a remote filesystem server as your backup storage you can now drop a backup snapshot with the same command. Eg.

For your backup retention policies you’d like to, say, delete all backups that are older than 30 days in a unix cron job. (Classic unix crond, systemd timer units, etc.)

To make this easier to script the command also supports an –older-than argument. Eg.

The two datestring formats supported are the YYYY-mm-dd and YYYY-dd-mmTHH:MM:SS shown above. UTC time is always used.

Remember: crontab won’t load the environment variables you have in your normal user terminal session, so PBM_MONGODB_URI will need to be explicitly set, or sourced. And remember – in a cluster run “pbm” CLI commands when connecting to the configsvr replicaset (documentation). To avoid showing the user credentials you should source it from an include file.

Got a huge backup and you’re trying PBM for the first time? Maybe you’re using an object store instead of filesystem for the first time, and/or this is not the production environment and you don’t know how good the servers are.

If you’d like see the upload MB/s rate you can look at the pbm-agent node’s logs to see the progress now. See “Backup progress logs” for a sample.

For PBM <= 1.1 it used gzip, as mongodump/mongoretore do. In earlier versions we had other compression options inside the code base, but suppressed them for conformity with mongodump. Eventually it became clear that gzip’s performance wasn’t sufficient and we needed to expose other choices.

We experimented with all the compression libraries shown below. We found that the “s2” library that parallelizes snappy compression was the fastest, so we’ve made that the default. (“s2” is no relation to AWS S3.)

Tip: if you want to throttle the upload speed, e.g. to avoid saturating the network, try one of the single-thread versions.

* lz4 wasn’t explored much because we haven’t identified a parallelized library for it. I believe it should have been a bit faster than single-threaded snappy if it were tuned to use a different level (lower compaction). Best-case examples in other projects have been reported at ~1GB/s.

A backup can have any of the following as an IO bottlenecks. You’ll only be going as fast as the slowest, whichever it is.

To enable you to figure out which of W, N, C or R it is we’ve created an extra program: pbm-speed-test.

Whichever of those three tests has the lowest throughput will be the bottleneck pbm backups have.